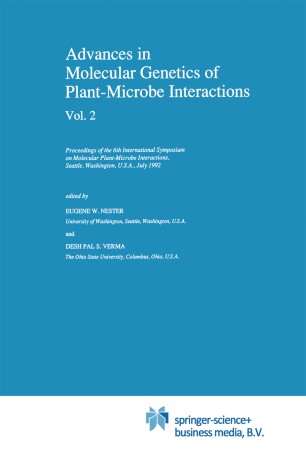 Research on the interaction between plants and microbes continues to attract increasing attention, both within the field as well as in the scientific community at large. Many of the major scientific journals have recently reviewed various aspects of the field. Several papers dealing with plant-microbe interactions have been featured on the covers of scientific publications in the past several months, and the lay press have recently presented feature articles of this field. An additional sign of the interest in this field is that the International Society of Molecular Plant-Microbe Interactions has almost 500 members. This book is a collection of the papers that were given at the Sixth Inlernational Symposium on the Molecular Genetics of Plant-Microbe Interactions which was held in Seattle, Washington in July, 1992. Approximately 650 scientists attended and approximately 50 lectures covering the topics of Agrobacterium-plant interactions, Rhizobium-plant interactions, bacteria-plant interactions, fungal-plant interactions and new aspects of biotechnology were presented. In addition, many sessions were devoted to the plant response to the microbe. Over 400 posters were presented of which the authors of 20 were selected to give an oral presentation. These papers are included in this volume as well. The symposium also included speakers whose research interests are not directly related to plant-microbe interactions but who are at the cutting edge of research areas that impact on the theme of the symposium. These individuals kindly agreed to summarize their talks and their papers are also included.