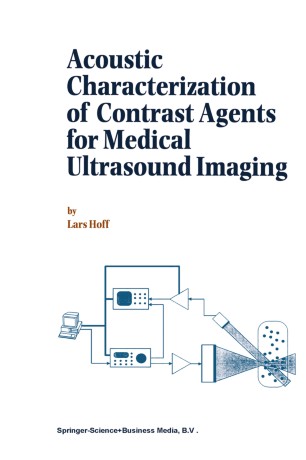 Contrast agents for medical ultrasound imaging is a field of growing interest. A large amount of literature has been published on the medical applications of such contrast agents. However, there is no textbook giving a broad overview of the physics and acoustics of the agents. This monograph aims to fill this gap.
The book is written by a physicist, from a physics point of view, and it tries to draw links from the physics and acoustics to the medical imaging methods, but medical applications are mainly included for background information.
The book consists of nine chapters. The first three chapters give a broad overview of the acoustic theory for bubble-sound interaction, both linear and nonlinear. Most contrast agents are stabilized in a shell, and this shell can have a strong influence on the interaction between the bubbles and the ultrasound. The effect of the shell is given special attention, as this is not easily found in other bubble literature. The following chapters, 4, 5, 6, and 7, describe experimental and theoretical methods used to characterize the acoustic properties of the agents, and results of studies on some agents. Chapter 8 shows how the theory and the experimental results can be combined and used to model various phenomena by means of computer simulations. The main purpose of the simulations is to get insight into the mechanisms behind the described phenomena, not to get accurate predictions and values.
The book is aimed at both newcomers into the field, as well as those who are more experienced but want better insight into the acoustics of the contrast bubbles.