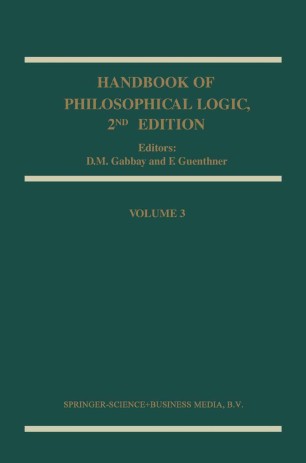 It is with great pleasure that we are presenting to the community the second edition of this extraordinary handbook. It has been over 15 years since the publication of the first edition and there have been great changes in the landscape of philosophical logic since then. The first edition has proved invaluable to generations of students and researchers in formal philosophy and language, as well as to consumers of logic in many applied areas. The main logic artiele in the Encyelopaedia Britannica 1999 has described the first edition as 'the best starting point for exploring any of the topics in logic'. We are confident that the second edition will prove to be just as good. ! The first edition was the second handbook published for the logic commu­ nity. It followed the North Holland one volume Handbook 0/ Mathematical Logic, published in 1977, edited by the late Jon Barwise. The four volume Handbook 0/ Philosophical Logic, published 1983-1989 came at a fortunate temporal junction at the evolution of logic. This was the time when logic was gaining ground in computer science and artificial intelligence cireles. These areas were under increasing commercial press ure to provide devices which help and/or replace the human in his daily activity. This pressure required the use of logic in the modelling of human activity and organisa­ tion on the one hand and to provide the theoretical basis for the computer program constructs on the other.