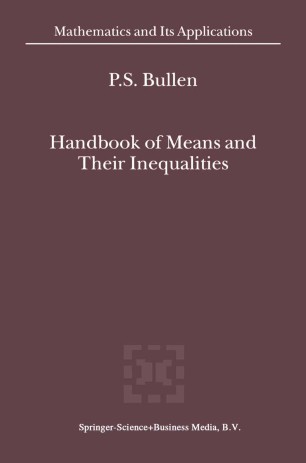 Handbook of Means and Their Inequalities

Part of the Mathematics and Its Applications book series (MAIA, volume 560)

There seems to be two types of books on inequalities. On the one hand there are treatises that attempt to cover all or most aspects of the subject, and where an attempt is made to give all results in their best possible form, together with either a full proof or a sketch of the proof together with references to where a full proof can be found. Such books, aimed at the professional pure and applied mathematician, are rare. The first such, that brought some order to this untidy field, is the classical "Inequalities" of Hardy, Littlewood & P6lya, published in 1934. Important as this outstanding work was and still is, it made no attempt at completeness; rather it consisted of the total knowledge of three front rank mathematicians in a field in which each had made fundamental contributions. Extensive as this combined knowledge was there were inevitably certain lacunre; some important results, such as Steffensen's inequality, were not mentioned at all; the works of certain schools of mathematicians were omitted, and many important ideas were not developed, appearing as exercises at the ends of chapters. The later book "Inequalities" by Beckenbach & Bellman, published in 1961, repairs many of these omissions. However this last book is far from a complete coverage of the field, either in depth or scope.