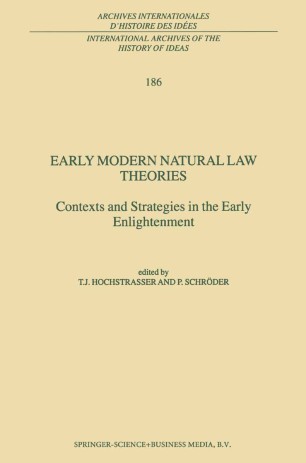 Contexts and Strategies in the Early Enlightenment

The study of natural law theories in the early Enlightenment continues to be one of the most fruitful areas of research in early modern intellectual history. In recent years there have been substantial reassessments of Grotius, Pufendorf, Thomasius 1 and the whole university-based tradition associated with the Frühaujklärung. The appeal of the discourse of natural jurisprudence to groups and individuals operating outside conventional educational and political structures - such as the Huguenot diaspora - has also been highlighted? Moreover the contextual understanding of the work of unambiguously major philosophers such as Hobbes and Kant - and its reception - has been greatly enhanced by studies that have sought to view them as 3 participants in rather than bystanders alongside the discourse of natural law. Thus thinkers previously not considered central to this discourse have been incorporated into it afresh. However, there is no danger of natural jurisprudence going unchallenged as the meta-discourse of political theory in this period, for recently new studies of the role of libertine and jansenist thought in shaping the priorities of the early Republic of Letters have challenged its position among the intellectual 4 achievements of the social and political theory of the early Enlightenment. This volume therefore offers a timely opportunity to reassess both the coherence of the concept of 'early Enlightenment' and the specific contribution of natural law theories to it.