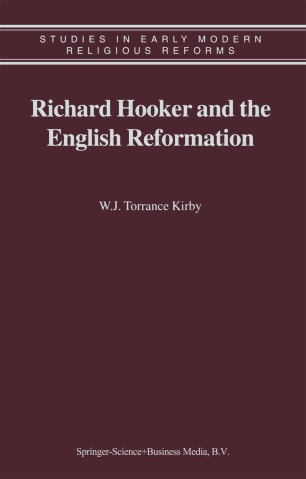 Richard Hooker and the English Reformation

P. G. STANWOOD OOKER, it might almost be said, is the name of a book rather than H the name of a man," wrote Christopher Morris in his introduction to the Everyman's Library edition of the first five books of the Lawes of Ecclesiasticall Politie. Now almost 100 years later, we know much more both about the book and the man. Of Hooker himself, C. J. Sisson's 1 Judicious Marriage of Mr. Hooker (1940) opened up and clarified many details of the life. His biographical research has been expanded in a number of ways, especially through the careful scrutiny and reassembling of Izaak Walton's early "official" Life (1666) by David Novarr in The Making of Walton's "Lives" (1958), and most recently by Jessica Martin in her fascinating study of Walton's Lives: Conformist Commemorations and the Rise of Biography (2001). Georges Edelen left his biography of Hooker unfinished at the time of his death, but much of his deep learning and scholarship is displayed in his detailed chronology of Hooker's life prefixed to the commentary volumes of the Folger Library Edition of the Works of Richard Hooker, and also in his editorial work on the Preface and Books I­ N of the Lawes in that edition. In addition, Philip Secor has recently published Richard Hooker: Prophet of Anglicanism (1999), a lively and engaging portrait aimed at a general audience.