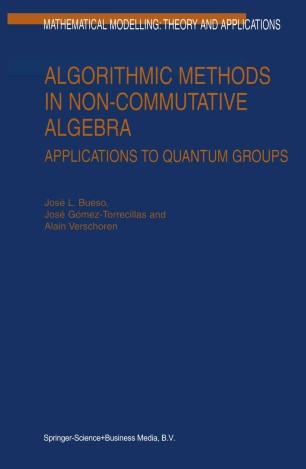 The already broad range of applications of ring theory has been enhanced in the eighties by the increasing interest in algebraic structures of considerable complexity, the so-called class of quantum groups. One of the fundamental properties of quantum groups is that they are modelled by associative coordinate rings possessing a canonical basis, which allows for the use of algorithmic structures based on Groebner bases to study them. This book develops these methods in a self-contained way, concentrating on an in-depth study of the notion of a vast class of non-commutative rings (encompassing most quantum groups), the so-called Poincaré-Birkhoff-Witt rings. We include algorithms which treat essential aspects like ideals and (bi)modules, the calculation of homological dimension and of the Gelfand-Kirillov dimension, the Hilbert-Samuel polynomial, primality tests for prime ideals, etc.