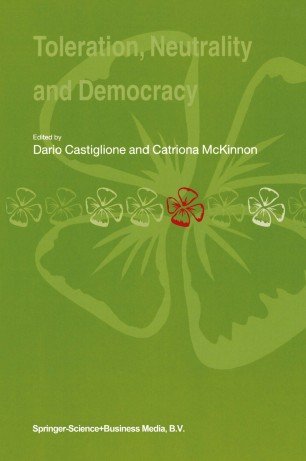 Catriona McKinnon and Dario Castiglione It is not an overstatement to say that toleration is one of the most important issues for the defmition of a moral and political theory with application to modem globalised societies. Toleration is a value which no politician in any liberal democratic society would dare to reject. In the UK, its value is reflected in the learning outcomes of education for citizenship isolated by the Final Report of the Advisory Group on Citizenship (which schools have a statutory responsibility to deliver): children ought to be disposed to the 'practice of toleration', and have the 'ability to tolerate other view points'. In these days of feelings of heightened insecurity prompting suspicion of strangers and departures from the norm, toleration has again taken centre stage as one of the values defmitive of stable and just liberal democratic societies. Toleration is a matter of principled restraint with respect to differences which are opposed, either at the personal or at the political level. With respect to the former level, the tolerant person does not use the power she has over others she dislikes and/or disapproves of to interfere with them. However, the tolerant person does not thereby divest herself of her dislike or disapproval; the tolerant person does not transform her dislike and disapproval into warm feelings, and neither does she simply become indifferent to what she hitherto disliked and disapproved of when she practices toleration.