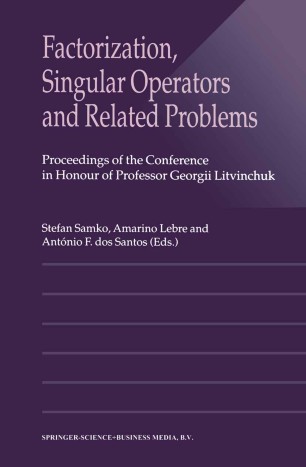 Proceedings of the Conference in Honour of Professor Georgii Litvinchuk

These proceedings comprise a large part of the papers presented at the In­ ternational Conference Factorization, Singular Operators and related problems, which was held from January 28 to February 1, 2002, at the University of th Madeira, Funchal, Portugal, to mark Professor Georgii Litvinchuk's 70 birth­ day. Experts in a variety of fields came to this conference to pay tribute to the great achievements of Professor Georgii Litvinchuk in the development of vari­ ous areas of operator theory. The main themes of the conference were focussed around the theory of singular type operators and factorization problems, but other topics such as potential theory and fractional calculus, to name but a couple, were also presented. The goal of the conference was to bring together mathematicians from var­ ious fields within operator theory and function theory in order to highlight recent advances in problems many of which were originally studied by Profes­ sor Litvinchuk and his scientific school. A second aim was to stimulate in­ ternational collaboration even further and promote the interaction of different approaches in current research in these areas. The Proceedings will be of great interest to researchers in Operator The­ ory, Real and Complex Analysis, Functional and Harmonic Analysis, Potential Theory, Fractional Calculus and other areas, as well as to graduate students looking for the latest results.