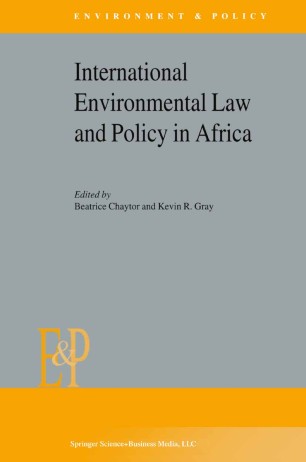 C.O.OKIDl1 I welcome the opportunity to prepare a Foreword to the book on Environmental Policy and Law in Africa, edited by Kevin R. Gray and Beatrice Chaytor. It is a pleasure to do that because the book is a contribution to the cause of capacity building for development and implementation of environmental law in Africa, a goal towards which I have had an undivided focus over the last two decades. There is still some belief in and outside Africa that for developing countries in general, and Africa in particular, development and implementation of environmental law is not a priority. This belief prevails strongly in many quarters of the industrialised countries. In fact, the view is held either out of blatant ignorance or by some renegade industrialists who fail to appreciate Michael Royston's 1979 thesis that Pollution Prevention Pays.2 That group, for obvious reasons, must have their correspondent counterparts in Africa to provide hope that industries rejected as derelict in the West or inoperable due to rigorous environmental regulation, can find homes to which they can escape and dump their polluting industries.