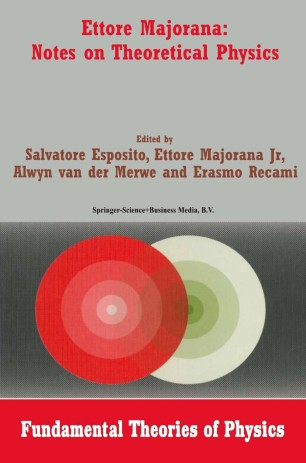 HISTORICAL PRELUDE Ettore Majorana's fame solidly rests on testimonies like the following, from the evocative pen of Giuseppe Cocconi. At the request of Edoardo Amaldi, he wrote from CERN (July 18, 1965): "In January 1938, after having just graduated, I was invited, essen­ tially by you, to come to the Institute of Physics at the University in Rome for six months as a teaching assistant, and once I was there I would have the good fortune of joining Fermi, Bernardini (who had been given a chair at Camerino a few months earlier) and Ageno (he, too, a new graduate), in the research of the products of disintegration of /-L "mesons" (at that time called mesotrons or yukons), which are produced by cosmic rays [ . . . ] "It was actually while I was staying with Fermi in the small laboratory on the second floor, absorbed in our work, with Fermi working with a piece of Wilson's chamber (which would help to reveal mesons at the end of their range) on a lathe and me constructing a jalopy for the illumination of the chamber, using the flash produced by the explosion of an aluminum ribbon short circuited on a battery, that Ettore Majorana came in search of Fermi. I was introduced to him and we exchanged few words. A dark face. And that was it.