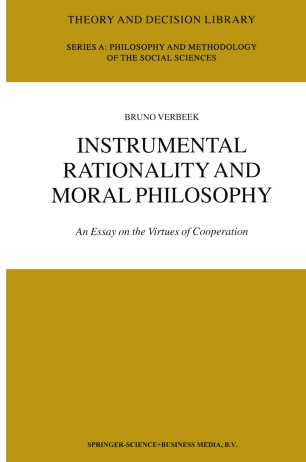 An Essay on the Virtues of Cooperation

Many academic authors incur debts in the production of their work, many of which are intellectual. I am no exception. One of my intellectual debts is to three remarkable books, which formed the starting point for my thinking about norms. The first of these books is well known among philosophers: David Lewis' Convention. In vintage Lewisian prose, the book gives a lucid and convincing conventionalist analysis of semantic norms. The second 1985 dissertation Wederkerige book is Govert den Hartogh's Verwachtingen (Mutual Expectations). Partly because it was written in Dutch - my native tongue -partly because of the occasionally impenetrable style, it never got the attention it deserves. In that book, Den Hartogh extends Lewis' analysis of semantic norms to moral norms. Den Hartogh introduced the notion of cooperative virtues that is the focus of much of this book. The third book is a book on economics, largely ignored by economists, which only lately has started to receive some recognition among philosophers: Robert Sugden's The Economics of Rights, Co­ operation and Welfare. Sugden's book explains the emergence and stability of norms in terms of social evolution. Though all three books develop a of norms, their arguments and constructions are conventionalist account very different. Lewis and Den Hartogh take the picture of rational man deliberating about his course of action very serious; Sugden rejects this picture as unrealistic and unnecessary.