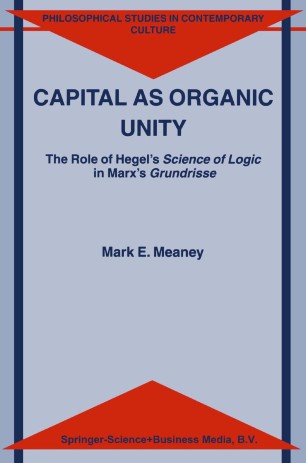 This book is a work of historical critical exegesis. It aims to establish the influence ofG.W.F. Hegel's Science of Logic (SL) on the Grundrisse of Karl Marx. I demonstrate that the Hegelian logic guided Marx's doctrinal development, and that the ordering of economic categories in the Grundrisse reflects the ordering ofthe logical categories in the SL. A historical critical exegesis can establish the influences on an author only in terms of probability. The exegesis can establish a particular influence with varying degrees of probability, but rarely with certitude. Thus, historical critical exegeses are limited in scope. This fact has advantages and disadvantages. Historical critical exegesis confines us to the particular texts under consideration and avoids the complexity often associated with other forms of textual exegesis, for example, structural exegesis. It must on occasion rely on such dubious evidence as phraseology. Moreover, when one text is allegedly found in another as a subtext, the exegesis focuses on the subtext prescinding from all other content. This narrow focus poses a danger, because such an exercise is naturally reductive. It can appear to reduce the entire work under consideration to the subtext. This particular danger is heightened when the work under consideration was not published by the author, but is a series of manuscripts-a kind of laboratory. Because my exegesis focuses on the subtext, the Grundrisse appears smoother and more complete than it actually is. These manuscripts are more complete than is sometimes supposed, but they are nevertheless manuscripts.