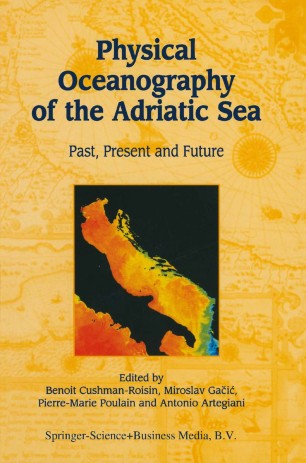 Physical Oceanography of the Adriatic Sea

Past, Present and Future

Because of its centrallocation in the Old World, the Adriatic Sea has long been explored and studied. Modern methods of investigation, however, have accelerated the pace of study during the last decade. These are the ADCP currentmeter, satellite imagery, drifter technology, and, last but not least, the computer with its arsenal of tools for data analysis and model simulations. As a result of this renaissance, the Adriatic Sea and its sub-basins are currently the object of intensified scrutiny by a number of scientific teams, in Europe and be­ yond. Questions concerning the mesoscale variability that dominates regional motions, the seasonal circulation of the sea, and its long-term climatic role in the broader Mediterranean, have become topics of lively discussions. The time was ripe then when an international workshop dedicated to the physical oceanography of the Adriatic Sea was convened in Trieste on 21-25 September 1998. Its objectives were to assess the current knowledge of the oceanography of the Adriatic Sea, to review the newly acquired observations, to create syn­ ergy between model simulations and observations, and to identify directions for future Adriatic oceanography. This book, however,is not the mere proceedings of the workshop. It was written as a monograph synthetizing the current knowledge of the physical oceanography of the Adriatic Sea, with the hope that it will serve as a reference to anyone interested in the Adriatic. The book also identifies topics in need of additional inquiry and proposes research directions for the next decade.