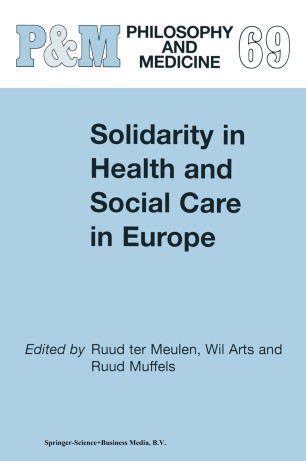 Solidarity in Health and Social Care in Europe

Part of the Philosophy and Medicine book series (PHME, volume 69)

OF 'SOLIDARITY' IN UK SOCIAL WELFARE Here then, perhaps, is a British version of solidarity in social welfare, but early there are strong tensions between the powerfully liberal individualistic strands of the British understanding of the functions of the state and the socialistic or communitarian tendency of a commitment to universal welfare provision. In the search for the roots of this understanding of welfare we shall survey, fitst, the historical background to these tensions in some early British political philosophers, starting with Hobbes and ending with Mill. We then consider the philosophical and social influences on the Beveridge Report itself, and we will trace the emergence of the philosophy of the welfare state in the era following the Second World War. Finally we consider the contemporary debate, as it relates to the 'Third Way' thinking of New Labour. 2. A mSTORICAL SKETCH In the previous section we observed that the philosophy underlying the Beveridge Report could be described as 'liberal collectivism'. What are the historical antecedents of this strange amalgam of individualism and collectivism? Within the short scope of this chapter, any account of the philosophical history must be little more than a sketch, but we can perhaps understand most debates in British socio-political thought as a continuing dialogue with the well known claim of Thomas Hobbes in Leviathan that all political institutions are founded on egoistic motives.