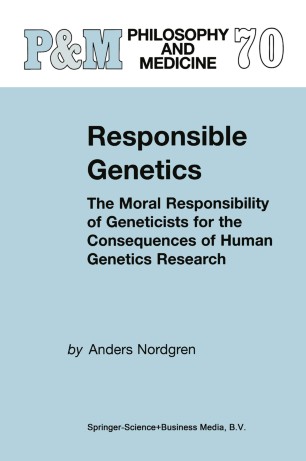 Part of the Philosophy and Medicine book series (PHME, volume 70)

MORAL RESPONSIBILITY AND THE HUMAN GENOME PROJECT The Human Genome Project (HGP) is now almost completed. A draft of the full DNA sequence of the human genome has recently been published (lnt. Hum. Gen. Seq. Cons., 2001; Venter et al., 2001). The project started in 1990 and was planned to be completed fifteen years later. lt is now clearly ahead of schedule. But even when the project is completed much work remains-the analysis of the function of the 30-40,000 genes in the human genome is beyond the scope of the project and willlast for decades. However, even before the HGP started, it was rather controversial from an ethical point of view; not so much because of the sequencing work as such, but because of its anticipated consequences. The results of the project might be used, for example, in developing genetic tests, genetically tailor-made drugs, and gene therapies. Some people fear that genetic testing may lead to discrimination in insurance and at the workplace. Some view the pharmaceutical companies' research on genetically tailor-made drugs as an unacceptable commercialization of science. Some anticipate that the development of gene therapy will give rise to a society in which parents want to design perfect babies with genetic enhancement techniques.