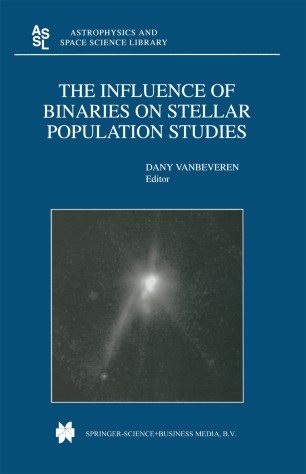 The Influence of Binaries on Stellar Population Studies

A star in a binary may interact with its companion and this complicates significantly its structure and evolution. During several decades in the past many astronomers hoped that the number of binaries is small. This is sometimes reflected in theoretical studies dealing with large populations of stars where it is ASSUMED (without any justification) that binaries do not alter the results. The number of confirmed binaries increases as observations improve and we there­ fore thought that the time was right to organize a meeting where the main topic would be the effect of binaries on stellar population studies. The SOC proposed a program with extended general overviews and highlights of non-evolved and evolved binaries, with low mass, intermediate mass and massive components, the link with supernova explosions, pulsars and gamma-ray bursts, the effect of binaries on the chemical evo­ lution of galaxies. Specialists in the different research fields were invited and have given very interesting and highly educational talks. As can be noticed by reading the proceedings, the authors have put a lot of effort in preparing their contribution.