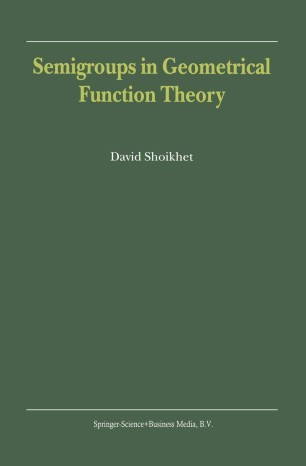 Historically, complex analysis and geometrical function theory have been inten­ sively developed from the beginning of the twentieth century. They provide the foundations for broad areas of mathematics. In the last fifty years the theory of holomorphic mappings on complex spaces has been studied by many mathemati­ cians with many applications to nonlinear analysis, functional analysis, differential equations, classical and quantum mechanics. The laws of dynamics are usually presented as equations of motion which are written in the abstract form of a dy­ namical system: dx / dt + f ( x) = 0, where x is a variable describing the state of the system under study, and f is a vector function of x. The study of such systems when f is a monotone or an accretive (generally nonlinear) operator on the under­ lying space has been recently the subject of much research by analysts working on quite a variety of interesting topics, including boundary value problems, integral equations and evolution problems (see, for example, [19, 13] and [29]). In a parallel development (and even earlier) the generation theory of one­ parameter semigroups of holomorphic mappings in en has been the topic of interest in the theory of Markov stochastic processes and, in particular, in the theory of branching processes (see, for example, [63, 127, 48] and [69]).

`The book is well written and elegantly structured. Also it subject is interesting and the figures included are suggestive. It is useful to student and postgraduate students who are interested in complex dynamic systems, as well as to all researchers specialized in complex analysis and differential equations.'
Zbl. MATH, 98:30001
Buy options