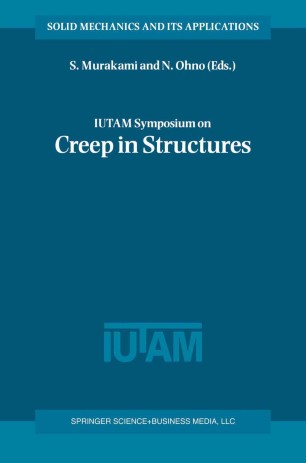 IUTAM Symposium on Creep in Structures

Proceedings of the IUTAM Symposium held in Nagoya, Japan, 3–7 April 2000

Part of the Solid Mechanics and its Applications book series (SMIA, volume 86)

The advent of steam turbines and the sudden rise of steam temperature at the beginning of the 20th century gave a great impetus to the start of scientific research on metal creep and high-temperature strength. Then aeronautical and aerospace exploitation in the 1940's and 1950's enlarged the scope of creep research. In this context, the first IUTAM Symposium on "Creep in Structures" was held at Stanford University in July 1960, and about 60 participants from seven countries around the world discussed their recent results on this problem. Subsequent innovation in science and technology, as in nuclear and new energy technology, new materials, large scale integration of semiconductors etc., has claimed solutions to new and challenging problems in this fundamental field of applied mechanics. In order to discuss the new topics in this discipline, the IUTAM Symposia "Creep in Structures" thereafter have been held every ten years; i.e. the second in 1970 at Gothenburg, Sweden, the third in 1980 at Leicester, U.K. and the fourth in 1990 at Cracow,Poland. The First (1960) and Second Symposium (1970) were concerned mainly with the phenomenological law of creep and creep analysis of structural elements, whereas the issues of the Third Symposium (1980) shifted toward the problems of creep damage, creep crack growth, practical and effective design methods, etc.