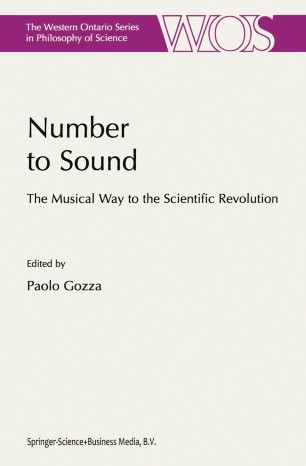 The Musical Way to the Scientific Revolution

Part of the The Western Ontario Series in Philosophy of Science book series (WONS, volume 64)

Number 10 Sound: The Musical Way 10 the Scientific Revolution is a collection of twelve essays by writers from the fields of musicology and the history of science. The essays show the idea of music held by Euro­ th pean intellectuals who lived from the second half of the 15 century to the th early 17 : physicians (e. g. Marsilio Ficino), scholars of musical theory (e. g. Gioseffo Zarlino, Vincenzo Galilei), natural philosophers (e. g. Fran­ cis Bacon, Isaac Beeckman, Marin Mersenne), astronomers and mathema­ ticians (e. g. Johannes Kepler, Galileo Galilei ). Together with other people of the time, whom the Reader will meet in the course of the book, these intellectuals share an idea of music that is far removed from the way it is commonly conceived nowadays: it is the idea of music as a science whose object-musical sound--can be quantified and demonstrated, or enquired into experimentally with the methods and instruments of modem scientific enquiry. In this conception, music to be heard is a complex, variable structure based on few simple elements--e. g. musical intervals-, com­ bined according to rules and criteria which vary along with the different ages. However, the varieties of music created by men would not exist if they were not based on certain musical models--e. g. the consonances-, which exist in the mind of God or are hidden in the womb of Nature, which man discovers and demonstrates, and finally translates into the lan­ guage of sounds.