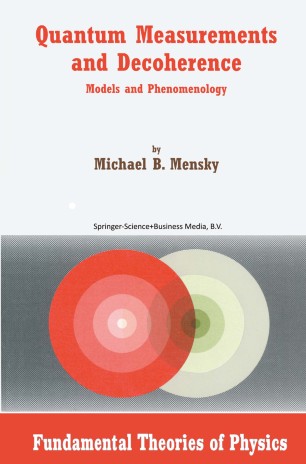 Quantum measurement (Le., a measurement which is sufficiently precise for quantum effects to be essential) was always one of the most impor­ tant points in quantum mechanics because it most evidently revealed the difference between quantum and classical physics. Now quantum measure­ ment is again under active investigation, first of all because of the practical necessity of dealing with highly precise and complicated measurements. The nature of quantum measurement has become understood much bet­ ter during this new period of activity, the understanding being expressed by the concept of decoherence. This term means a physical process lead­ ing from a pure quantum state (wave function) of the system prior to the measurement to its state after the measurement which includes classical elements. More concretely, decoherence occurs as a result of the entangle­ ment of the measured system with its environment and results in the loss of phase relations between components of the wave function of the measured system. Decoherence is essentially nothing else than quantum measurement, but considered from the point of view of its physical mechanism and resolved in time. The present book is devoted to the two concepts of quantum measure­ ment and decoherence and to their interrelation, especially in the context of continuous quantum measurement.