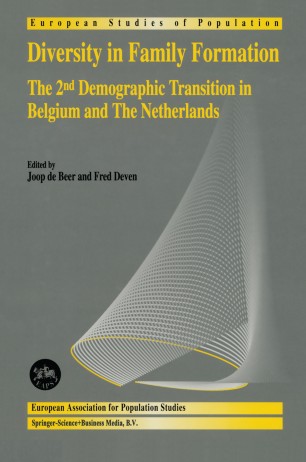 The 2nd Demographic Transition in Belgium and The Netherlands

The aim of Diversity in Family Formation is to examine changes in the start of the family formation process. Rather than giving a rough overview of demographic changes in many countries, a comparison of differences in changes in family formation and fertility behaviour between Belgium and The Netherlands is interesting for various reasons.
First, even though the economic and cultural differences between these countries are relatively small there is one important difference: Belgium is predominantly Catholic, whereas The Netherlands has about equal proportions of Catholics and Protestants. Second, if the Second Demographic Transition implies that there is one common pattern of change in different European countries and that differences across countries are due to the fact that countries are in a different stage of the transition process, and if it is assumed that the transition process started earlier in Protestant countries than in Catholic countries, one would expect The Netherlands to be in a further stage of the transition process than Belgium. Thus an in-depth comparison of changes in family formation and fertility behaviour between both countries may give us more insight in the question of whether there is one common transition process. The comparison of fertility and family survey-data in both countries brings us to the core question of whether there is one common explanation for differences between countries in various types of fertility and family behaviour under consideration, namely fertility regulation, the choice of living arrangement after leaving the parental home, and the labour force participation of mothers.