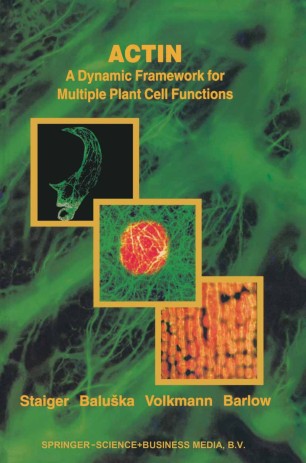 Part of the Developments in Plant and Soil Sciences book series (DPSS, volume 89)

Actin is an extremely abundant protein that comprises a dynamic polymeric network present in all eukaryotic cells, known as the actin cytoskeleton. The structure and function of the actin cytoskeleton, which is modulated by a plethora of actin-binding proteins, performs a diverse range of cellular roles. Well-documented functions for actin include: providing the molecular tracks for cytoplasmic streaming and organelle movements; formation of tethers that guide the cell plate to the division site during cytokinesis; creation of honeycomb-like arrays that enmesh and immobilize plastids in unique subcellular patterns; supporting the vesicle traffic and cytoplasmic organization essential for the directional secretory mechanism that underpins tip growth of certain cells; and coordinating the elaborate cytoplasmic responses to extra- and intracellular signals. The previous two decades have witnessed an immense accumulation of data relating to the cellular, biochemical, and molecular aspects of all these fundamental cellular processes. This prompted the editors to put together a diverse collection of topics, contributed by established international experts, related to the plant actin cytoskeleton. Because the actin cytoskeleton impinges on a multitude of processes critical for plant growth and development, as well as for responses to the environment, the book will be invaluable to any researcher, from the advanced undergraduate to the senior investigator, who is interested in these areas of plant cell biology.