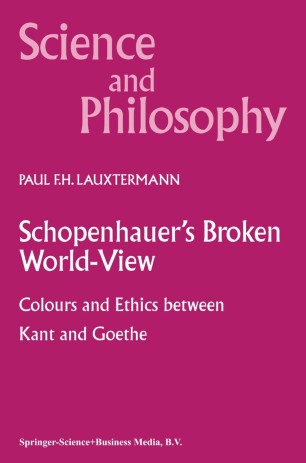 Colours and Ethics between Kant and Goethe

Part of the Science and Philosophy book series (SCPH, volume 10)

Schopenhauer's philosophy, at first sight so beautifully rounded, upon analysis reveals itself as the secret arena of two conflicting world-views. The present analysis considers the conflict by confronting Schopenhauer as a `disciple-of-sorts of Kant' with Schopenhauer as `Goethe's one-time collaborator on the theory of colour'. Here the two meet over profound issues which the Scientific Revolution of the 17th century has ineluctably put before us: what is the right level at which to apprehend nature; what is the proper foundation for a consistent ethics; how (if at all) to arrive at a unified conception of a world broken by modern science?
In this deeply-delving, lucidly written, humane and erudite study, the history of philosophical currents is blended with history of science, with history of ideas generally, and (to elucidate relevant portions of Schopenhauer's biography and intellectual and social environment) with German history too. The analysis, while benefiting from the scholarly literature, is grounded primarily in original research among the collected works of Schopenhauer, Kant and Goethe, considered in all their philosophical, scientific, and literary variety.