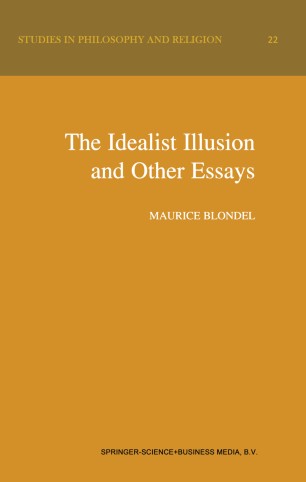 The Idealist Illusion and Other Essays

Part of the Studies in Philosophy and Religion book series (STPAR, volume 22)

I was very happy when in 1997 Fiachra Long came to spend part of his sabbatical leave at the Archives Maurice Blondel at Louvain-Ia-Neuve. This allowed him to bring together and complete his translation of three important articles from Maurice Blondel, known as the philosopher of Aix-en-Province. These three articles fonn a unity: they make explicit certain aspects of the method used in the great thesis of 1893, Action. This thesis, it is well known, aroused many polemic debates after its appearance. Thomist theologians accused Blondel of turning back towards Kantian idealism whereas the philosophers of the Revue de metaphysique et de morale accused him on the contrary of falling back on a pre-critical realism. The three articles translated here, each in its own way, attempt to pass beyond these two opposite charges. The Idealist Illusion (1898) underlines the fact that the content of consciousness should be unfurled as it appears, by withdrawing from any idealist or realist prejudice, before judging the consistency of its content as a whole. In this way Blondel supports the "phenomenological" method used in his thesis. The Elementary Principle of a Logic of the Moral Life (1903) is a very well-worked text which shows that "the logic of possession and privation" is broader than "the logic of amnnation and negation. " Using these words, Blondel develops certain striking laws of action such as that of the "parallelogram of contrary forces.