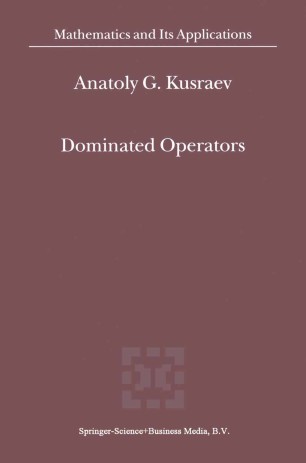 Part of the Mathematics and Its Applications book series (MAIA, volume 519)

The notion of a dominated or rnajorized operator rests on a simple idea that goes as far back as the Cauchy method of majorants. Loosely speaking, the idea can be expressed as follows. If an operator (equation) under study is dominated by another operator (equation), called a dominant or majorant, then the properties of the latter have a substantial influence on the properties of the former . Thus, operators or equations that have "nice" dominants must possess "nice" properties. In other words, an operator with a somehow qualified dominant must be qualified itself. Mathematical tools, putting the idea of domination into a natural and complete form, were suggested by L. V. Kantorovich in 1935-36. He introduced the funda­ mental notion of a vector space normed by elements of a vector lattice and that of a linear operator between such spaces which is dominated by a positive linear or monotone sublinear operator. He also applied these notions to solving functional equations. In the succeedingyears many authors studied various particular cases of lattice­ normed spaces and different classes of dominated operators. However, research was performed within and in the spirit of the theory of vector and normed lattices. So, it is not an exaggeration to say that dominated operators, as independent objects of investigation, were beyond the reach of specialists for half a century. As a consequence, the most important structural properties and some interesting applications of dominated operators have become available since recently.