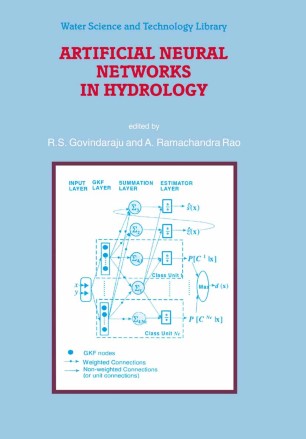 R. S. GOVINDARAJU and ARAMACHANDRA RAO School of Civil Engineering Purdue University West Lafayette, IN. , USA Background and Motivation The basic notion of artificial neural networks (ANNs), as we understand them today, was perhaps first formalized by McCulloch and Pitts (1943) in their model of an artificial neuron. Research in this field remained somewhat dormant in the early years, perhaps because of the limited capabilities of this method and because there was no clear indication of its potential uses. However, interest in this area picked up momentum in a dramatic fashion with the works of Hopfield (1982) and Rumelhart et al. (1986). Not only did these studies place artificial neural networks on a firmer mathematical footing, but also opened the dOOf to a host of potential applications for this computational tool. Consequently, neural network computing has progressed rapidly along all fronts: theoretical development of different learning algorithms, computing capabilities, and applications to diverse areas from neurophysiology to the stock market. . Initial studies on artificial neural networks were prompted by adesire to have computers mimic human learning. As a result, the jargon associated with the technical literature on this subject is replete with expressions such as excitation and inhibition of neurons, strength of synaptic connections, learning rates, training, and network experience. ANNs have also been referred to as neurocomputers by people who want to preserve this analogy.