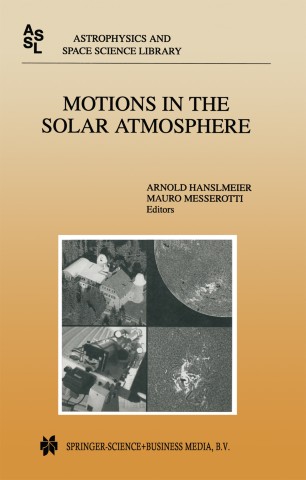 Motions in the Solar Atmosphere

Proceedings of the Summerschool and Workshop Held at the Solar Observatory Kanzelhöhe Kärnten, Austria, September 1–12, 1997

This book contains the proceedings of the Summerschool and Workshop Motions in the Solar Atmosphere held from September 1st to September 12th, 1997, at the Solar Observatory Kanzelh6he, which belongs to the Astronomical Institute of the University of Graz, Austria. This type of conference has proved to be very successful in bringing together experts from specialized topics in solar physics and young scientists and students from different countries. Moreover, the summerschool was accompanied by a workshop which offered young scientists the opportunity to present their new results to a general audience. In total the summerschool and the workshop were attended by 50 par­ ticipants from 10 different countries. The topic selected was quite general, covering the whole solar atmo­ sphere and its dynamic processes: from dynamo actions and large and small scale motions in the photosphere through the complex dynamics of the chro­ mosphere to the corona. Also the possible influences of variations in solar output parameters to the Earth's climate were addressed. The main lec­ tures were given by 7 lecturers. Furthermore, there were 20 contributions to the workshop which were presented in oral form. The selection of the Kanzelh6he Solar Observatory located in Central Europe, Austria, also permitted colleagues from the former eastern coun­ tries to attend the meeting. At the Kanzelh6he Observatory new instru­ ments had been recently installed so that the meeting provided a further stimulus for the local people working there.