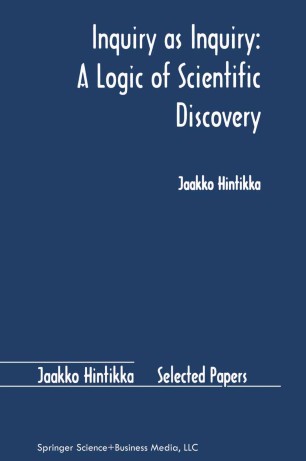 Inquiry as Inquiry: A Logic of Scientific Discovery

Is a genuine logic of scientific discovery possible? In the essays collected here, Hintikka not only defends an affirmative answer; he also outlines such a logic. It is the logic of questions and answers. Thus inquiry in the sense of knowledge-seeking becomes inquiry in the sense of interrogation. Using this new logic, Hintikka establishes a result that will undoubtedly be considered the fundamental theorem of all epistemology, viz., the virtual identity of optimal strategies of pure discovery with optimal deductive strategies. Questions to Nature, of course, must include observations and experiments. Hintikka shows, in fact, how the logic of experimental inquiry can be understood from the interrogative vantage point. Other important topics examined include induction (in a forgotten sense that has nevertheless played a role in science), explanation, the incommensurability of theories, theory-ladenness of observations, and identifiability.

Jaakko Hintikka is the author or co-author of thirty volumes and of some 300 scholarly articles in mathematical and philosophical logic, epistemology, language theory, philosophy of science, history of ideas and history of philosophy, including Aristotle, Descartes, Leibniz, Kant, Peirce, The Bloomsbury Group, Husserl and Wittgenstein. He has also been active in international scholarly organizations, most recently as the First Vice-President of FISP, Vice-President of IIP and Co-Chair of the American Organizing Committee of the Twentieth World Congress of Philosophy. He has been Editor-in-Chief of the International Journal Synthese and the Managing Editor of Synthese Library since 1965.