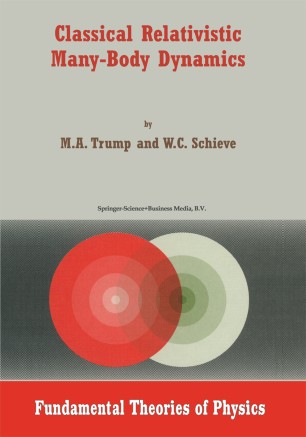 in this work, we must therefore assume several abstract concepts that hardly need defending at this point in the history of mechanics. Most notably, these include the concept of the point particle and the concept of the inertial observer. The study of the relativistic particle system is undertaken here by means of a particular classical theory, which also exists on the quantum level, and which is especially suited to the many-body system in flat spacetime. In its fundamental postulates, the theory may be consid­ ered to be primarily the work of E.C.G. Stiickelberg in the 1940's, and of L.P. Horwitz and C. Piron in the 1970's, who may be said to have provided the generalization of Stiickelberg's theory to the many-body system. The references for these works may be found in Chapter 1. The theory itself may be legitimately called off-shell Hamiltonian dynamics, parameterized relativistic mechanics, or even classical event dynamics. The most important feature of the theory is probably the use of an invariant world time parameter, usually denoted T, which provides an evolution time for the system in such as way as to allow manifest co­ variance within a Hamiltonian formalism. In general, this parameter is neither a Lorentz-frame time, nor the proper time of the particles in the system.