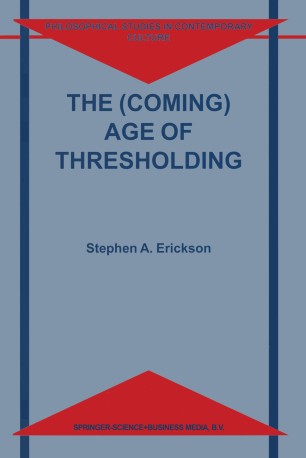 The (Coming) Age of Thresholding

As a philosopher, Stephen Erickson considers himself a messenger of sorts and the message he is delivering is an important and groundbreaking one. He convincingly argues that we are entering into a new historical moment, a period which will only be properly defined and named by those who come after us, as were the Renaissance and the Enlightenment. Erickson predicts a failure and eventual breakdown of traditional values and institutions resulting in a dramatic change in our understanding of human life. This he illustrates with clear examples from contemporary political, economic and religious circumstances. To lessen the impact of this dramatic changeover, which will be initially experienced as upheaval and global anxiety, Erickson argues that we must do all we can to come into this new era, which he has called The Age of Thresholding, with a better understanding of our past and present. Only then can the message our future holds be properly received and understood.
Many have asked why and when our century's values came into being, and why they have been sustained in the manner in which they have. These are legitimate historical questions, and I hope to supply some answers. But other questions should be directed toward our future. Over what threshold might we be crossing and what will have been ventured? What will have been gained, and what will be left behind?
from The (Coming) Age of Thresholding