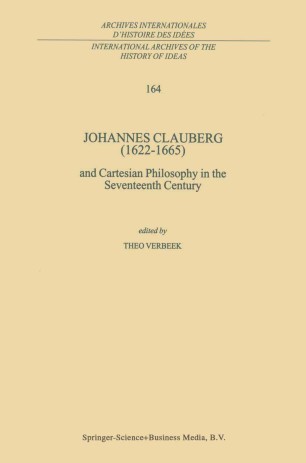 and Cartesian Philosophy in the Seventeenth Century

In this book twelve outstanding historians of early modern philosophy undertake a study of the philosophy of Johannes Clauberg (1622-1665). Clauberg was not only among the first followers of Descartes (whose philosophy he taught from 1650 in Herborn and from 1652 until the end of his life in Duisburg) but also assured its survival as an academic philosophy by giving it a more traditional and more didactic expression. A first group of articles deals with Clauberg's early metaphysics as it found its expression in his Ontosophia of 1646 (republished with very considerable changes in 1664), the way it was influenced by Comenius (Leinsle), its relation to Malebranche (Bardout) and Wolff (École) and the way in which it illustrates the difficulties of a Cartesian ontology in general (Carraud). A second group of articles deals with problems of knowledge: knowledge of God (Goudriaan), perceptual knowledge (Spruit) and causality (Pätzold). There are also articles on Clauberg's curious attempt to deal philosophically with the etymology of the German language (Weber), Clauberg as a teacher of Descartes' Principia (Verbeek), Clauberg's conception of corporeal substance (Mercer), and Clauberg's relation to later, more radical developments in Cartesian philosophy, especially in Lodewijk Meyer (Albrecht). The volume is completed by a biographical introduction and a short title bibliography of Clauberg's works, which allows an appreciation of Clauberg's lasting international influence. It is the first study on this scale of one of the most influential philosophers of the seventeenth century.