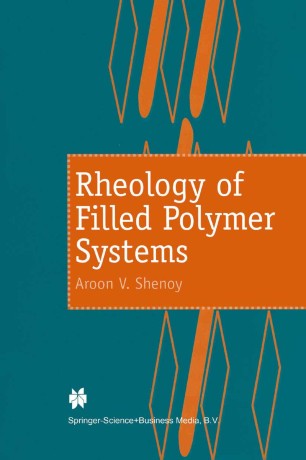 Polymerie materials have been replacing other conventional materials like metals, glass and wood in a number of applications. The use of various types of fillers incorporated into the polymer has become quite common as a means of reducing cost and to impart certain desirable mechanieal, thermal, electrieal and magnetic properties to the polymers. Oue to the energy crisis and high priees of petrochemieals, there has been a greater demand to use more and more fillers to cheapen the polymerie materials while maintaining and/or improving their properties. The advantages that filled polymer systems have to offer are normally offset to some extent by the increased complexity in the rheological behavior that is introduced by the inclusion of the fillers. Usually when the use of fillers is considered, a compromise has to be made between the improved mechanieal properties in the solid state, the increased difficulty in melt processing, the problem of achieving uniform dispersion of the filler in the polymer matrix and the economics of the process due to the added step of compounding. It has been recognized that addition of filler to the polymer brings a change in processing behavior. The presence of the filler increases the melt viscosity leading to increases in the pressure drop across the die but gives rise to less die swell due to decreased melt elasticity.