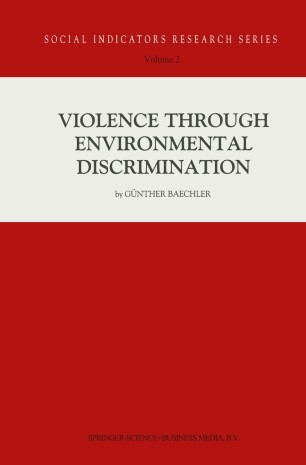 Since all-out interstate wars for the time being seem to belong to the past, con­ flict studies focus more and more on domestic conflicts. This is a broad field, not only because the arbitrary line between war and sub-war violence disap­ pears and the analyst is confronted with phenomena reaching from criminal violence and clashes between communities to violent conflicts of long duration and civil wars with massacres and genocides as their characteristics. It is also because there are so many different types of conflicts to be analyzed, so many different types of behavior to be studied, whereas there is often little informa­ tion available on what is really going on. Against the background of internal conflicts, which tend to be as protracted as diffuse in terms of time, intensity, actors, and their goals, this study aims to follow a specific pathway through the current thicket of violent circumstances. It focuses on causation patterns by exploring the causal role of the environ­ mental factor in the genesis of violent conflicts occurring today and probably even more so tomorrow. This approach, which for once does not focus on a specific level of the conflict system, on one area in the conflict geography, or on a specific category of actors, analyzes causation dynamics.