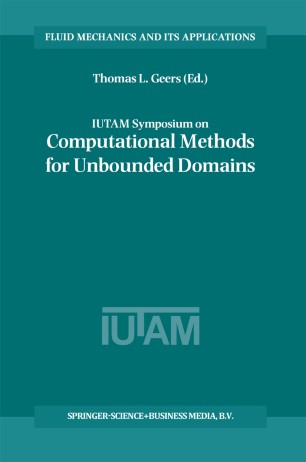 Part of the Fluid Mechanics and Its Applications book series (FMIA, volume 49)

During 27-31 July 1997, thirty-seven researchers in acoustics, aeronautics, elastodynamics, electromagnetics, hydrodynamics and mathematics participated in a Symposium on Computa­ tional Methods for Unbounded Domains. The symposium was sponsored by the International Union of Theoretical and Applied Mechanics and was held at the University of Colorado in the United States of America. The symposium was opened by Dr. Richard Byyny, Chancellor of the University's Boulder Campus, who concluded his remarks by reading a letter from Professor Bruno A. Boley, JUT AM Representative on the Scientific Committee. Thirty-three papers were presented. About two-thirds of these focused on the classical wave equation of acoustics; however, three papers dealt with hydrodynamic surface waves, two with electromagnetic waves, three with elastodynamic waves, and four with waves in aero­ dynamics. Approximately two-thirds of the papers addressed steady-state problems, with the rest treating problems in the time domain. Extended abstracts of the papers appear in this volume, arranged in alphabetical order according to the last name of the presenting author. A key unifying aspect of the symposium was the creation of four working groups that labored in parallel to formulate benchmark problems for evaluating computational boundaries. The working groups reviewed the papers presented each day, searching for benchmark candidates. Then they considered other possibilites and organized the ensemble into logical categories. At the end of the symposium, each group presented its benchmark candidates to the assembly of participants, which subsequently made a preliminary consolidation of the benchmarks.