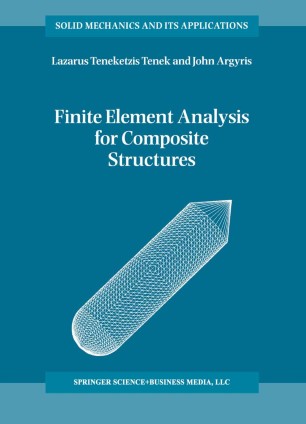 Part of the Solid Mechanics and Its Applications book series (SMIA, volume 59)

This book is an adventure into the computer analysis of three dimensional composite structures using the finite element method (FEM). It is designed for Universities, for advanced undergraduates, for graduates, for researchers, and for practising engineers in industry. The text advances gradually from the analysis of simple beams to arbitrary anisotropic and composite plates and shells; it treats both linear and nonlinear behavior. Once the basic philosophy of the method is understood, the reader may expand its application and modify the computer programs to suit particular needs. The book arose from four years research at the University of Stuttgart, Germany. We present the theory and computer programs concisely and systematically so that they can be used both for teaching and applications. We have tried to make the book simple and clear, and to show the underlying physical and mathematical ideas. The FEM has been in existence for more than 50 years. One of the authors, John Argyris, invented this technique in World War II in the course of the check on the analysis of the swept back wing of the twin engined Meteor Jet Fighter. In this work, he also consistently applied matrix calculus and introduced triangular membrane elements in conjunction with two new definitions of triangular stresses and strains which are now known as the component and total measures. In fact, he was responsible for the original formulation of the matrix force and displacement methods, the forerunners of the FEM.