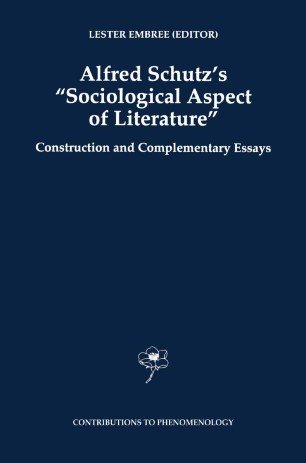 Part of the Contributions to Phenomenology book series (CTPH, volume 31)

The maintext in the present volume has beenconstructed out of passages found scattered aboutin thirty-five years of Alfred Schutz's writings, and it has been constructed by following a pageof notes for a lecture that he gave in 1955 under the title "Sociological Aspect of Literature. " The result can be considered the substance of Schutz's contribution to the theory of literature. More detail about how this construction has beenperformed is offered in the Editor's Introduction. The complementary essays areby scholars from Germany, Japan, andthe United States , from several generations, and from the disciplines of anthropology, philosophy, and sociology. These researchers were invited to reflect in their own perspectives on the main text and in relation to matters referred to within and beyond it. Draftversions of most of these complementary essays were presented for critical discussion in a research symposium held at the Graduate Faculty of Political and Social Science of theNewSchool for Social Research on April28-29, 1995 underthe sponsorship of The Center for Advanced Research in Phenomen­ ology, Inc. , Florida Atlantic University; The Department of Philosophy of The Graduate Faculty of the New School, Richard 1. Bernstein, Chair; and Evelyn and George Schutz, the philosopher's children. Revised versions of these presentations and also several essays subsequently recruited are offered to begin yet another stagein thehistory of scholarship on Schutz and the phenomenological research inspired by him. Northwestern University Press is thanked for permission to quote extensively from Alfred Schutz, The Phenomenology of the Social World, trans.