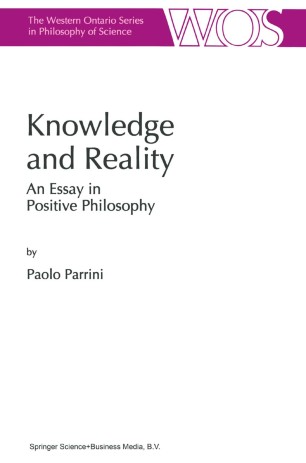 An Essay in Positive Philosophy

Part of the The Western Ontario Series in Philosophy of Science book series (WONS, volume 59)

XIV The stability of a philosophical construction will depend not only upon the solidity of the blocks, of the pillars and architraves that make it up, but also upon the way in which all these parts are connected. Of course, it will not be possible to argue for every single part of a philosophical building: to do so would mean to embark in a virtually endless enterprise. Accordingly, some of the parts of a philosophical building will have to be taken from the literature on the subject as 'ready made' or 'semi-finished' elements, while others will be argued for in the course of building. This is what happened in my work too. In some cases (for in­ stance, in the case of epistemic relativism), my concern was to illustrate theses which I believed to be sufficiently consolidated, rather than to ar­ gue for them. In other cases - where I was directly engaged in building the theory that I want to fonnulate - I did exactly the opposite. This is what I have tried to achieve, for example, for those proper architraves of my construction, viz. the connection between scepticism and metaphysi­ cal realism. and the thesis of the nonnative value of the fundamental epistemological notions (truth, objectivity, and rationality).