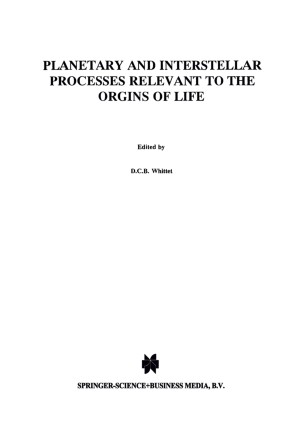 Planetary and Interstellar Processes Relevant to the Origins of Life

These are exciting times for exobiology. The ubiquity of organic molecules in interstellar clouds, comets and asteroids strongly supports a cosmic perspective on the origin of life. Data from both ground-based telescopes and the recently launched Infrared Space Observatory are providing new insight into the complexity of carbon-based chemistry beyond the Earth. Meteorites give us solid evidence for extraterrestrial amino acids, and putative fossil evidence for life in a 3.6 billion-year-old Martian meteorite hints that life in our system might not be the sole prerogative of the Earth. Giant planets have now been discovered orbiting other stars, and although such planets seem unlikely to be habitable themselves, their existence strongly suggests what many astronomers have long believed - that planetary systems are commonplace.
All these topics are reviewed in this volume by active researchers. The level is appropriate for graduate students in astronomy, biology, chemistry, earth sciences, physics, and related disciplines. It will also provide a valuable source of reference for active researchers in these fields.