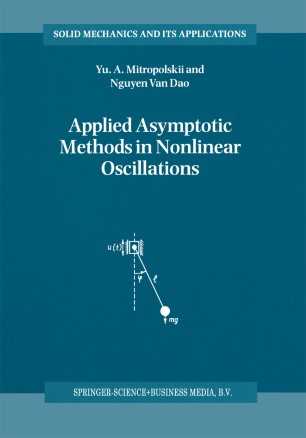 Part of the Solid Mechanics and Its Applications book series (SMIA, volume 55)

Many dynamical systems are described by differential equations that can be separated into one part, containing linear terms with constant coefficients, and a second part, relatively small compared with the first, containing nonlinear terms. Such a system is said to be weakly nonlinear. The small terms rendering the system nonlinear are referred to as perturbations. A weakly nonlinear system is called quasi-linear and is governed by quasi-linear differential equations. We will be interested in systems that reduce to harmonic oscillators in the absence of perturbations. This book is devoted primarily to applied asymptotic methods in nonlinear oscillations which are associated with the names of N. M. Krylov, N. N. Bogoli­ ubov and Yu. A. Mitropolskii. The advantages of the present methods are their simplicity, especially for computing higher approximations, and their applicability to a large class of quasi-linear problems. In this book, we confine ourselves basi­ cally to the scheme proposed by Krylov, Bogoliubov as stated in the monographs [6,211. We use these methods, and also develop and improve them for solving new problems and new classes of nonlinear differential equations. Although these methods have many applications in Mechanics, Physics and Technique, we will illustrate them only with examples which clearly show their strength and which are themselves of great interest. A certain amount of more advanced material has also been included, making the book suitable for a senior elective or a beginning graduate course on nonlinear oscillations.