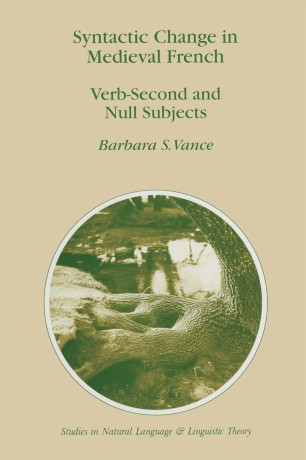 1. 0. V2 AND NULL SUBJECTS IN THE HIS TORY OF FRENCH The prototypical Romance null subject language has certain well­ known characteristics: verbal inflection is rich, distinguishing six per­ sonlnumber forms; subject pronouns are generally emphatic; and, when there is no need to emphasize the subject, the pronoun is not expressed at all. Spanish and Italian, for example, fit this description rather weIl. Modem French, however, provides a striking contrast to these lan­ guages; it does not allow subjects to be missing and, not unexpectedly, it has a verbal agreement system with few overt endings and subject pronouns which are not emphatic. One of the goals of the present work is to examine null subjects in two dialects of Romance that fit neither the Italian nor the French model: later Old French (12th-13th centriries) and MiddIe French (14th- 15th centuries). Old French has null subjects only in contexts where the subject would be postverbal if expressed (cf. Foulet (1928)), and Mid­ dIe French has null subjects in a wider range of syntactic contexts but does not freely allow a11 persons of the verb to be null. The work of Vanelli, Renzi and Beninca (1985) (along with many other works by these authors individually) shows that a number of other geographically proximate medieval dialects had similar systems, though it appears that there are significant differences in detail among them.

`... this admirably meticulous study is a milestone in generativist historical linguistics.'
Journal of French Language Studies, 9 (1999)