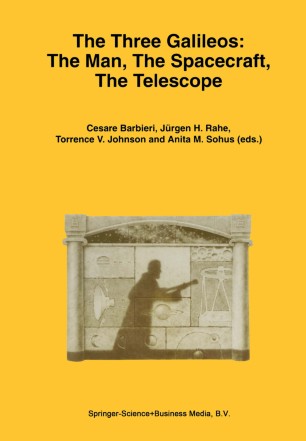 The Three Galileos: The Man, the Spacecraft, the Telescope

Proceedings of the Conference held in Padova, Italy on January 7–10, 1997

The idea of having a conference in Padova describing the results obtained by the Galileo spacecraft and the characteristics of the Telescopio Nazionale Galileo began in 1995, when a number of colleagues from both sides of the Atlantic began exchanging suggestions and ideas. Looking at the schedules of the two teams, it was clear that the beginning of January 1997 would be a good time to hold the conference; these dates also luckily coincided with the dates of the memorable discovery of the Medicean moons of Jupiter by Galileo Galilei in Padova in 1610. To emphasize these three elements, the name of the conference was then proposed and accepted by the involved parties: NASA and JPL in the United States, the German space agency DARA, the University of Padova, and the Astronomical Observatory in Padova. I wish to recall a few key dates: In January 1610, Galileo--from his house in Padova--had the first hint of three and then four stars connected to Jupiter. In December 1995, the probe released from the spacecraft entered the atmosphere of Jupiter, and the spacecraft entered orbit about Jupiter. These extraordinary events were followed at JPL by a number of representatives of many institutions and space agencies. In June 1996, the Telescopio Nazionale Galileo was inaugurated by the King of Spain Juan Carlos I, in the presence of Prof. Luigi Berlinguer, Minister of University and Science. These ceremonies occurred as the spacecraft started touring the moon Europa.