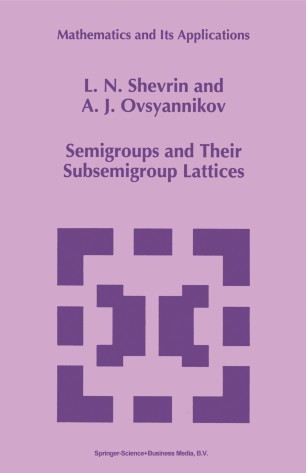 Semigroups and Their Subsemigroup Lattices

Part of the Mathematics and Its Applications book series (MAIA, volume 379)

0.1. General remarks. For any algebraic system A, the set SubA of all subsystems of A partially ordered by inclusion forms a lattice. This is the subsystem lattice of A. (In certain cases, such as that of semigroups, in order to have the right always to say that SubA is a lattice, we have to treat the empty set as a subsystem.) The study of various inter-relationships between systems and their subsystem lattices is a rather large field of investigation developed over many years. This trend was formed first in group theory; basic relevant information up to the early seventies is contained in the book [Suz] and the surveys [K Pek St], [Sad 2], [Ar Sad], there is also a quite recent book [Schm 2]. As another inspiring source, one should point out a branch of mathematics to which the book [Baer] was devoted. One of the key objects of examination in this branch is the subspace lattice of a vector space over a skew field. A more general approach deals with modules and their submodule lattices. Examining subsystem lattices for the case of modules as well as for rings and algebras (both associative and non-associative, in particular, Lie algebras) began more than thirty years ago; there are results on this subject also for lattices, Boolean algebras and some other types of algebraic systems, both concrete and general. A lot of works including several surveys have been published here.