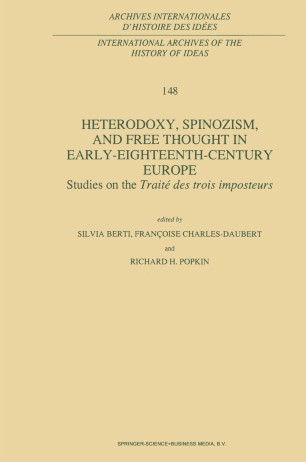 'the oldest biography of Spinoza', La Vie de Mr. Spinosa, which in the manuscript copies is often followed by L'Esprit de M. Spinosa. Margaret Jacob, in her Radical Enlightenment, contended that the Traite was written by a radical group of Freemasons in The Hague in the early eighteenth century. Silvia Berti has offered evidence it was written by Jan Vroesen. Various discussions in the early eighteenth century consider many possi­ ble authors from the Renaissance onwards to whom the work might be attributed. The Trois imposteurs has attracted quite a bit of recent attention as one of the most significant irreligious clandestine writings available in the Enlightenment, which is most important for understanding the develop­ ment of religious scepticism, radical deism, and even atheism in the seventeenth and eighteenth centuries. Scholars for the last couple of decades have been trying to assess when the work was actually written or compiled and by whom. In view of the widespread distribution of manu­ scripts of the work all over Europe, they have also been seeking to find out who was influenced by the work, and what it represented for its time. Hitherto unknown manuscripts are being turned up in public and private libraries all over Europe and the United States.