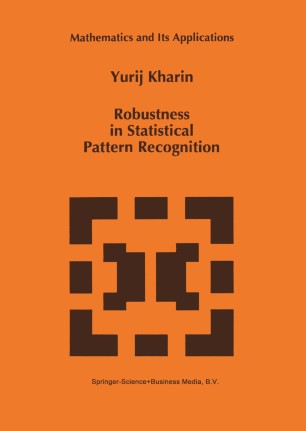 Part of the Mathematics and Its Applications book series (MAIA, volume 380)

This book is concerned with important problems of robust (stable) statistical pat­ tern recognition when hypothetical model assumptions about experimental data are violated (disturbed). Pattern recognition theory is the field of applied mathematics in which prin­ ciples and methods are constructed for classification and identification of objects, phenomena, processes, situations, and signals, i. e. , of objects that can be specified by a finite set of features, or properties characterizing the objects (Mathematical Encyclopedia (1984)). Two stages in development of the mathematical theory of pattern recognition may be observed. At the first stage, until the middle of the 1970s, pattern recogni­ tion theory was replenished mainly from adjacent mathematical disciplines: mathe­ matical statistics, functional analysis, discrete mathematics, and information theory. This development stage is characterized by successful solution of pattern recognition problems of different physical nature, but of the simplest form in the sense of used mathematical models. One of the main approaches to solve pattern recognition problems is the statisti­ cal approach, which uses stochastic models of feature variables. Under the statistical approach, the first stage of pattern recognition theory development is characterized by the assumption that the probability data model is known exactly or it is esti­ mated from a representative sample of large size with negligible estimation errors (Das Gupta, 1973, 1977), (Rey, 1978), (Vasiljev, 1983)).