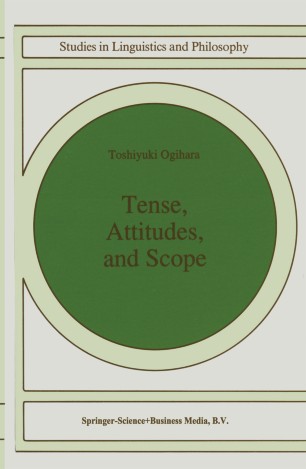 Part of the Studies in Linguistics and Philosophy book series (SLAP, volume 58)

Tense, Attitudes, and Scope is a model-theoretic inquiry into the semantics of tense in natural language. The book presents the view that the semantic contribution of tense is made in relation to structurally higher expressions (the `relative tense theory') and argues against the view that tenses are all indexicals. This idea is formally encoded as a de se analysis of attitudes, originally proposed by Lewis, coupled with a sequence-of-tense rule posited for English. An auxiliary proposal is made to account for some exceptional cases (e.g. so-called double-access sentences), which invokes de re attitudes about temporal entities (states or intervals). Since the proposed account assumes that the interpretation of tense is structure-dependent, it also correctly predicts scope interactions between tenses and NPs.
Tense, Attitudes, and Scope is intended for scholars and graduate students in formal semantics, syntax-semantics interface, philosophy of language and Japanese linguistics.