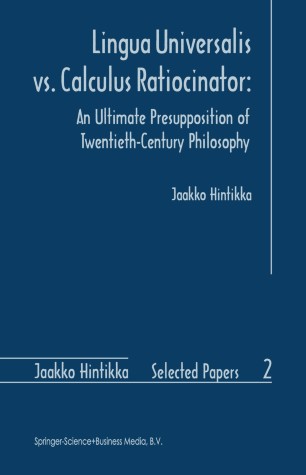 An Ultimate Presupposition of Twentieth-Century Philosophy

R. G. Collingwood saw one of the main tasks of philosophers and of historians of human thought in uncovering what he called the ultimate presuppositions of different thinkers, of different philosophical movements and of entire eras of intellectual history. He also noted that such ultimate presuppositions usually remain tacit at first, and are discovered only by subsequent reflection. Collingwood would have been delighted by the contrast that constitutes the overall theme of the essays collected in this volume. Not only has this dichotomy ofviews been one ofthe mostcrucial watersheds in the entire twentieth-century philosophical thought. Not only has it remained largely implicit in the writings of the philosophers for whom it mattered most. It is a truly Collingwoodian presupposition also in that it is not apremise assumed by different thinkers in their argumentation. It is the presupposition of a question, an assumption to the effect that a certain general question can be raised and answered. Its role is not belied by the fact that several philosophers who answered it one way or the other seem to be largely unaware that the other answer also makes sense - if it does. This Collingwoodian question can be formulated in a first rough approximation by asking whether language - our actual working language, Tarski's "colloquiallanguage" - is universal in the sense of being inescapable. This formulation needs all sorts of explanations, however.