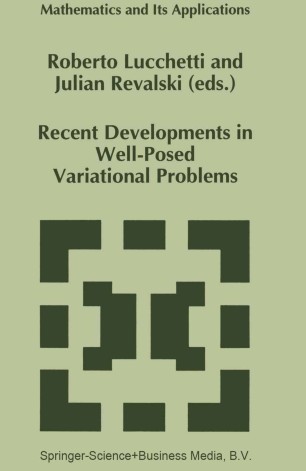 Part of the Mathematics and Its Applications book series (MAIA, volume 331)

This volume contains several surveys focused on the ideas of approximate solutions, well-posedness and stability of problems in scalar and vector optimization, game theory and calculus of variations. These concepts are of particular interest in many fields of mathematics. The idea of stability goes back at least to J. Hadamard who introduced it in the setting of differential equations; the concept of well-posedness for minimum problems is more recent (the mid-sixties) and originates with A.N. Tykhonov. It turns out that there are connections between the two properties in the sense that a well-posed problem which, at least in principle, is "easy to solve", has a solution set that does not vary too much under perturbation of the data of the problem, i.e. it is "stable". These themes have been studied in depth for minimum problems and now we have a general picture of the related phenomena in this case. But, of course, the same concepts can be studied in other more complicated situations as, e.g. vector optimization, game theory and variational inequalities. Let us mention that in several of these new areas there is not even a unique idea of what should be called approximate solution, and the latter is at the basis of the definition of well­ posed problem.