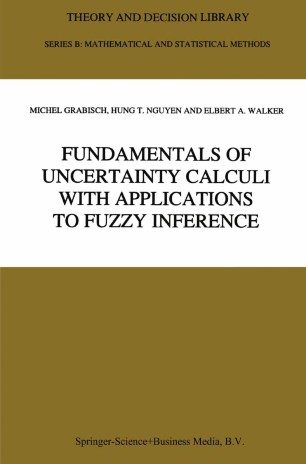 Fundamentals of Uncertainty Calculi with Applications to Fuzzy Inference

With the vision that machines can be rendered smarter, we have witnessed for more than a decade tremendous engineering efforts to implement intelligent sys­ tems. These attempts involve emulating human reasoning, and researchers have tried to model such reasoning from various points of view. But we know precious little about human reasoning processes, learning mechanisms and the like, and in particular about reasoning with limited, imprecise knowledge. In a sense, intelligent systems are machines which use the most general form of human knowledge together with human reasoning capability to reach decisions. Thus the general problem of reasoning with knowledge is the core of design methodology. The attempt to use human knowledge in its most natural sense, that is, through linguistic descriptions, is novel and controversial. The novelty lies in the recognition of a new type of un­ certainty, namely fuzziness in natural language, and the controversality lies in the mathematical modeling process. As R. Bellman [7] once said, decision making under uncertainty is one of the attributes of human intelligence. When uncertainty is understood as the impossi­ bility to predict occurrences of events, the context is familiar to statisticians. As such, efforts to use probability theory as an essential tool for building intelligent systems have been pursued (Pearl [203], Neapolitan [182)). The methodology seems alright if the uncertain knowledge in a given problem can be modeled as probability measures.