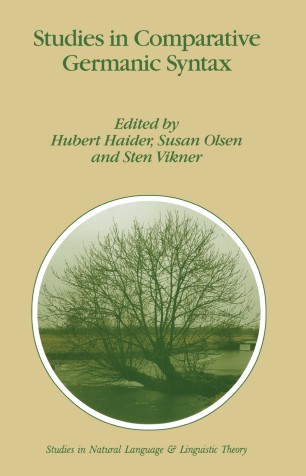 o. COMPARATIVE GERMANIC SYNTAX This volume contains 13 papers that were prepared for the Seventh Workshop on Comparative Germanie Syntax at the University of Stuttgart in November 1991. In defining the theme both of the workshop and of this volume, we have taken "comparative" in "comparative Germanic syntax" to mean that at least two languages should be analyzed and "Germanic" to mean that at least one of these languages should be Germanic. There was no require­ ment as such that the research presented should be situated within the framework known as Principles and Parameters Theory (previously known as Government and Binding Theory), though it probably is no accident that this nevertheless turned out to be the case. Within this theory, it is seen as highly desirable to be able to account for several differences on the surface by deriving them from fewer under­ lying differences. The reason is that, in order to explain the ease with which children acquire language, it is assumed that not all knowledge of any given language is the result of learning, but that instead children already possess part of this knowledge at birth (the innate part of linguistic knowledge will obviously be the same for all human beings, and thus this theory also provides an explanation of language universals). The fewer "real" (i.e.